Biden: ‘My Message to the Proud Boys,’ White Supremacists Is ‘Cease and Desist’ 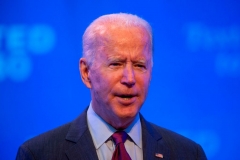 (CNSNews.com) - Democratic presidential nominee Joe Biden said Wednesday that his message to “the Proud Boys and every other white supremacy group is cease and desist.”

During a campaign stop in Alliance, Ohio, on Wednesday, a reporter asked Biden what his fears are about the implications of Trump’s “rhetoric” about the Proud Boys and whether the former vice president has a message for the Proud Boys today.

The former vice president urged people to “go out and vote,” and he said if he wins, Trump “will step down.”

“It’s a lot of bravado. He has no alternative. The American people will not stand for it. No agency will stand for that happening. My message to the Proud Boys and every other white supremacy group is cease and desist. That’s not who we are. This is not who we are as Americans,” Biden said.

As CNSNews.com previously reported, Trump was asked to condemn white supremacists and militia groups at the presidential debate, to which Trump said, “Sure, I’m willing to do that. I would say almost everything I see is from the left wing, not the right wing. I'm willing to do anything. I want to see peace.”

The president asked, “What do you want to call them? Give me a name.”

On Wednesday, Biden was asked whether there’s any scenario where he would not debate President Donald Trump in the next two upcoming debates and whether there are any changes he wants to see made by the debate commission before he debates.

“Well, he not only attacked me constantly and my family, but he attacked the moderator, and again on his tweets this morning or last night. I just hope there is a way in which the debate commission can control the ability of us to answer the question without interruptions. I am not going to speculate on what happens in a second or third debate,” the former vice president said.

Biden was asked what he learned Tuesday about going face-to-face with Trump and whether he would do anything different the next time. A reporter also pointed out that there is talk that two more debates are not worth having.

It's not an inconsequential assertion. Look, he did what I expected him to do last night. He announced what he was going to do. He announced -- he was going to, I think the phrase was, now he can become really vicious. I think that was his phrase at some point. Last night reinforced for me why I got in the race in the first place. I said when I got in the race we are in a battle for the soul of this country.

You know, Trump's constant disregard and unwillingness to speak to COVID and the fact 205 million-- 205,000 people have already died and over 7 million are infected and it's likely to get worse. He didn't want to talk about it at all. In terms of election legitimacy, he made it clear ... if he lost, it wouldn’t be a legitimate election and already planting seeds of doubt in the legitimacy of this election. I don't know any president who has ever done that before.

What I tried to do last night, I tried to speak directly into the camera to the American people, to talk about their concerns. To talk about what’s on their minds and talk about what I would do were I president. Trump has no plans. No ideas, didn't express a single plan that he had on how to move forward and It made me realize just how much is at stake.

You know for 90 minutes, he tried everything to distract, everything possible and It just did not work. but I hope the next debate is going to be in front of real live people. It's going to be a town hall. I hope we are able to -- I look forward to it and I hope we are able to actually answer the questions that are asked by the persons in the room, but God only knows what he will do.