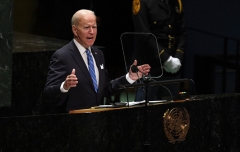 President Joe Biden addresses the 76th Session of the UN General Assembly on September 21, 2021 in New York. (Photo by TIMOTHY A. CLARY/POOL/AFP via Getty Images)

“As we pursue diplomacy across the board, the United States will champion the democratic values that go to the very heart of who we are as a nation and a people, freedom, equality, opportunity, and a belief in the universal rights of all people,” the president said.

“We sometimes forget a quote the opening words of the universal declaration of human rights, quote, the equal and inalienable rights of all members of the human family is the foundation of freedom, justice, and peace in the world. The founding ethos of the United Nations places the rights of individuals at the center of our system,” he continued.

As CNSNews.com reported, Biden told the U.N. that he is the first U.S. president to address the world body in 20 years without the United States being engaged in war.

“I stand here today for the first time in 20 years with the United States not at war,” he said.

“We've turned the page. All the unmatched strength, energy and commitment, will and resources of our nation are now fully and squarely focused on what's ahead of us, not what was behind.”