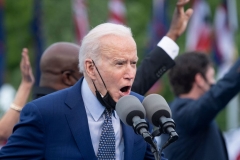 (CNSNews.com) – President Joe Biden on Friday said that K-12 schools “should probably all be open” in the fall, because based on the science and the Centers for Disease Control and Prevention (CDC), there isn’t much of a transmission among young people.

During an interview with NBC’s “Today Show,” Biden was asked whether all school should be open in the fall despite the fact that a vaccine won’t be available for kids by then.

“Based on the science and CDC, they should probably all be open. There's not overwhelming evidence that there's much of a transmission among these people, young people,” the president said.

NBC’s Craig Melvin noted that 40 percent of Marines say they won’t get vaccinated according to a recent poll.

He asked whether Biden will order service members to get vaccinated against COVID-19 once the FDA gives final approval for vaccines, not just emergency use authorization.

“I don't know. I'm going to leave that to the military,” Biden said.

When asked why not, the president said, “I'm not saying I won't. I think you're going to see more and more of them getting it, and I think it's going to be a tough call as to whether or not they should be required to have to get it in the military, because you're in such close proximity to other military personnel, whether you're in a -- quarters whether you're all sleeping or out on maneuvers.”

As CNSNews.com previously reported, the CDC updated its guidelines this week, saying that vaccinated people can go without masks outdoors unless in a crowded setting.

Melvin asked whether Americans will see Biden – who is fully vaccinated - outside without a mask on from now on, the president said, “Sure, but what I'm going to do, because the likelihood of my being able to be outside and people not come up to me is not very high, so it's like, look, you and I took our masks off when I came in because look at the distance we are, but if we were, in fact, sitting there talking to one another close, I’d have my mask on, and you’d have a mask, even though we’ve both been vaccinated.

"And so it's a small precaution to take that has a profound impact. It's a patriotic responsibility for God sake. It's making sure that your wife, your children, your-- if in fact, they haven't been vaccinated, making sure that they're not going to get sick,” he said.