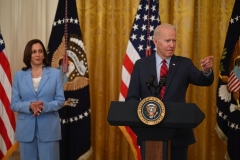 President Joe Biden, with Vice President Kamala Harris, speaks about the infrastructure deal from the East Room of the White House in Washington, DC, on June 24, 2021. (Photo by JIM WATSON/AFP via Getty Images)

(CNSNews.com) – President Joe Biden announced Thursday that he has reached a $1.2 trillion bipartisan deal on an infrastructure package that includes $7.5 billion for electric charging stations along U.S. roads – half of what he originally asked for - as well as money for broadband, replacing lead pipes, and weatherizing buildings.

“Let me be clear. Neither side got everything they wanted in this deal. This is what it means to compromise, and it reflects something important. It reflects consensus. The heart of democracy requires consensus. It is this time a true bipartisan effort, breaking the ice that too often has kept us frozen in place, preventing us from solving the real problems facing the American people,” he said.

“This deal means millions of good paying jobs and fewer burdens felt at the kitchen table and across the country and safer and healthier communities, but it also signals to ourselves and to the world that American democracy can deliver,” the president said, adding that it’s “a huge day” for one half of his economic agenda - the American Jobs Plan.

“It delivers clean transportation, clear water and clean water, universal broadband, clean power infrastructure and environmental resilience, and these areas invest two-thirds of the resources that I have proposed in my American Jobs Plan - two-thirds of what I called for out there, but I am getting the work of Congress right away on the other half as well - the American Family Plan,” Biden said.

“You finish the job on child care, education, economy, clean energy and tax cuts for American families and much more. For me, investment in our physical and human infrastructure are intertwined. Both make us better off and stronger. The case for these investments is clear,” the president said.

“Economists, left, right, and center, independent Wall Street forecasters, they all say that these kinds of public investments mean more jobs, more workers participating in the labor force, higher productivity, and higher growth for our economy over the long run,” he added.

Biden said that both the infrastructure deal and a Democrat reconciliation bill that includes “human infrastructure” need to get done, and he promised to work with House Speaker Nancy Pelosi (D-Calif.) and Senate Majority Leader Chuck Schumer (D-N.Y.) “to make sure that they move through promptly and in tandem.”

“We’re going to have to do that through the budget process, and we need a fair tax system to pay for it all. I’m not going to rest until both get to my desk,” he said.

“And lastly, I know that there were some of my party who discourage me from seeing an agreement with our Republican colleagues, who said that we should go bigger and go alone. To them, I say this. I’ve already shown in my young presidency that I’m prepared to do whatever needs to be done to move the country forward. That’s what I did with the American Rescue Plan, which was $1.9 trillion,” Biden said.

He promised to seek common ground working across party lines where he can, because “the broader support a proposal has in Congress, the stronger its prospect for passage.”