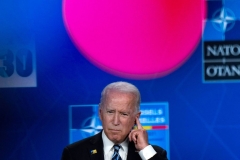 President Joe Biden gives a press conference after the NATO summit at the North Atlantic Treaty Organization (NATO) headquarters in Brussels, on June 14, 2021. (Photo by FRANCISCO SECO/POOL/AFP via Getty Images)

(CNSNews.com) - President Joe Biden said Thursday that if Russian President Vladimir Putin uses chemical weapons in Ukraine, the United States and NATO will respond, but he would not say what that response would be.

Biden also would not say whether he has specific intelligence suggesting that Putin is using those weapons.

“You've warned about the real threat of chemical weapons being used. Have you gathered specific intelligence that suggest that President Putin is deploying these weapons, moving them into position or considering their use and would the U.S. or NATO respond with military action if he did use chemical weapons?” a reporter asked the president during a press conference in Brussels, Belgium.

“Sir, you've made it very clear in this conflict that you do not want to see World War III, but is it possible that in expressing that so early that you were too quick to rule out direct military intervention in this war? Could Putin have been emboldened knowing that you are not going to get involved directly in this conflict?” ABC News Chief White House Correspondent Cecilia Vega asked.

“It would trigger a response in kind. Whether or not, you are asking whether NATO would cross -- we’d make that decision at the time,” Biden said.