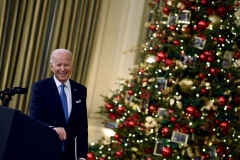 President Joe Biden answers questions after speaking about the status of the countrys fight against Covid-19 and the Omicron variant, in the State Dining Room of the White House in Washington, DC, on December 21, 2021. (Photo by BRENDAN SMIALOWSKI/AFP via Get

(CNSNews.com) - President Biden said Tuesday that no one anticipated the Omicron variant to spread so rapidly on a daily basis since it was discovered last month.

“On testing, Sir, you said we have to do better but public health officials have been saying for months you need to surge rapid tests for just this moment. Is it a failure that you don't have an adequate amount of tests for everyone to be able to get one if they need one right now?” a reporter asked.

“No, it's not because Covid is spreading so rapidly. If you notice, that it just happened almost overnight. Just in the last month. So no, it’s not, but an alarm’s going off. I don't think anybody anticipated that this was going to be as rapidly-spreading as it did,” Biden said.

“So the question is we have a lot of people who have access to tests, who can order them, could have their insurance pay for them, et cetera. All of a sudden it was like everybody rushed to the counter. There was a big, big rush,” the president said.

“I knew that was coming so what I tried to do is meet with the companies and use the Defense Production Act to get a half a billion more tests and figure out how to get them to their homes, get them on their shelves and in the store. That's what it's about,” he said.

“What is your message to Americans who are trying to get tested now and who are not able to get tested and who are wondering what took so long to ramp up testing?” PBS Newshour White House Correspondent Yamiche Alcindor asked.

BIDEN: Come on. What took so long?

ALCINDOR: I'm hearing that from people who are trying to get tested now before the holidays.

BIDEN: What took so long is it didn't take long at all. What happened was that the omicron virus spread even more rapidly than anything thought. If I told you four weeks ago that this would spread by a day-to-day basis, it would spread by 50%, 100%, 200%, I think you would have looked at me and said, ‘Biden, what are you drinking?’ But that's what it did.

We don't know what’s going to happen from here. There's some evidence that in South Africa where a lot of this started that it's dropping off quickly, too. We don't know. But I do know that we're not going to be in a position like I said -- remember, when we had problem with masks and gowns and the like.

I said I promise you, I got questions from some of you, ‘Why are you still paying for the masks and gowns? Why are you stockpiling this?’ Because we don't know. Turns out we're going to need them.

When asked whether the president plans to reverse the travel ban now that Omicron is so prevalent in the United States, Biden said, “I'm considering reversing. I'm going to talk with my team in the next couple days.

“Remember why I said we put the travel ban on is to see how much time we had before it hit here so we could begin to decide what we needed here by looking at what’s happened in other countries, but we're past that now. It's something that is being raised with me with the docs now. I'll have an answer for that soon,” he said.