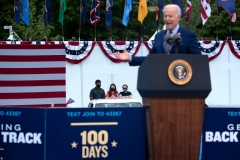 (CNSNews.com) – President Joe Biden said Friday that he doesn’t think America is racist or that the American people are racist, but he said they have to deal with the after effects of slavery and Jim Crow.

In an interview with NBC’s “The Today Show,” Biden was asked about Sen. Tim Scott’s (R-S.C.) Republican response to the president’s speech to a joint session of Congress during which Scott said that America is not racist.

“Is it?” NBC’s Craig Melvin asked.

“No, I don't think the American people are racist, but I think after 400 years, African-Americans have been left in a position where they are so far behind the 8-ball in terms of education and health, in terms of opportunity,” Biden said.

"I don't think America is racist, but I think the overhang from all of the Jim Crow and before that slavery have had a cost, and we have to deal with it,” the president said.

On the issue of Biden’s spending priorities, Melvin pointed out that in the first 100 days, the president proposed $6 trillion in new spending that will be paid for by raising taxes on people, businesses, and investments.

“Why tax and spend so much when the economy is still recovering as a result of the pandemic?” Melvin asked.

“That's the reason why it's recovering, because we're investing. Look how rapidly it's recovered since we passed the last piece of legislation, and that legislation was $1.9 trillion. If we don't invest in this country, we're going to actually start to -- we're going to fall behind even further,” Biden said.

“Democrats and Republicans for generations have been shall we say skeptical about the ability of big government to do big things. What makes you so confident that skepticism has changed?” Melvin asked.

“First of all, the facts don't reflect that,” the president said. “I don't have any inordinate faith in government, but there's certain things only the government can do. We rank number eight in the world in terms of infrastructure for God sake.

“Is the private sector going to go out and build billions of dollars worth of highways, ports, airports, bridges? Are they going to do that? And so, these are things that only government can really do,” Biden said.