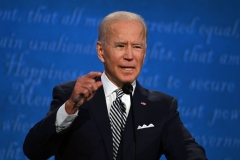 (CNSNews.com) - Democratic presidential nominee Joe Biden said Wednesday that he’s not worried about “losing the left, right or center of the party” despite his performance in the first presidential debate on Tuesday.

During a campaign stop in Alliance, Ohio, Biden was asked whether he’s going too far center and alienating people on the left given how he’s said some things during the debate that put distance between himself and the liberal wing of the Democratic Party. He was also asked whether he’s spoken to Rep. Alexandria Ocasio-Cortez (D-N.Y.).

“No, I have not. I appreciated her endorsement,” Biden said. “Look, we had a debate with 22 to 25 people in the Democratic Party. I said at the time that I would tell you exactly what I believed, and I would say why I believed it and why I was running. That's exactly what I did. I did not support Medicare for all and don't support it now. I support the Biden plan that I have laid out.”

The former vice president claimed that the Green New Deal is “not a bad deal,” but it’s not his plan.

“That’s what it’s about, and what the president keeps trying to do, he is trying to run against somebody other than me. I’ve said to the left and the right and the center, exactly where I am on each of these issues. I did have time, and I’ve worked very hard with all segments of the party. We put together a platform that is a platform that I fully support,” Biden said.

“The president keeps talking about -- what does he call it? He has some name for our platform. I can't remember what it is,” he said.

A journalist shouted out “the Manifesto,” which refers to a 110-page policy wish list compiled by six joint task forces appointed by Biden and Sen. Bernie Sanders (I-Vt.) in May.

“We negotiated and debated and we had a primary and I won, and I’ve laid out what we’re going to do. I am not worried about losing the left, right or center of the party. This is a big party, but I have one of the most progressive records of any Democrat’s run on. I’m proud of it, but it's my record and what I want to do,” he said.