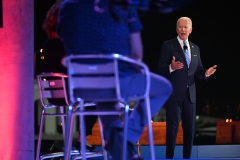 (CNSNews.com) – Democratic presidential nominee Joe Biden pushed back on accusations that voting for him is a vote for socialism and communism, saying Monday that he is “no more a socialist or a communist” than President Donald Trump is.

During MSNBC’s town hall, a man from Florida who lives in Coral Gables said that Cuban American and Venezuelan voters there were being targeted with messages by the Trump campaign claiming that a vote for Biden was a vote for the radical left, socialism and communism. He asked what Biden can tell them to make them comfortable voting for him.

“I look like a socialist? Look, I'm the guy that ran against the socialist,” Biden said, referring to self-avowed socialist Sen. Bernie Sanders (I-Vt.).

“Remember I got in trouble with the whole campaign - 20-some candidates, Joe Biden was too centrist, too moderate, to straightforward. That was Joe Biden,” the former vice president said.