Biden: ‘Hate Will Not Prevail, and White Supremacy Will Not Have the Last Word’ 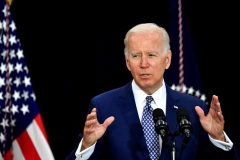 President Joe Biden delivers remarks after visiting a memorial near a Tops grocery store in Buffalo, New York, on May 17, 2022. (Photo by NICHOLAS KAMM/AFP via Getty Images)

(CNSNews.com) – President Biden called on Americans to reject the so-called replacement theory in the wake of the mass shooting at a grocery store in Buffalo, N.Y., that claimed the lives of 10 people and injured three more.

“In America, evil will not win. I promise you. Hate will not prevail, and white supremacy will not have the last word, but evil did come to Buffalo, and it's come to all too many places, manifest in gunmen who massacred innocent people in the name of hateful and perverse ideology, rooted in fear and racism,” Biden said.

“It’s taken so much. Ten lives cut short in a grocery store. Three other wounded by a hate-filled individual, who had driven 200 miles from Binghamton, at range, to carry out a murderous, racist rampage that he would live stream, live stream to the world,” Biden said, adding that what happened in Buffalo is “domestic terrorism,” the president said.

“What happened here is simple and straightforward: Terrorism. Terrorism. Domestic terrorism. Violence inflicted in the service of hate and a vicious thirst for power that defines one group of people being inherently inferior to any other group - a hate that through the media and politics, the internet, has radicalized angry, alienated, lost, and isolated individuals into falsely believing that they will be replaced,” he said.

“That's the word - ‘replaced’ by the other, by people who don't look like them, and who are therefore, in the perverse ideology, that they possess and being fed, lesser beings. I and all of you reject the lie. I call on all Americans to reject the lie, and I condemn those who spread the lie for power, political gain, and for profit. That's what it is,” Biden said.

“We have now seen too many times the deadly and destructive violence this ideology unleashes,” the president said, as he compared the shooting to Charlottesville, Va.

“We've heard the chants, ‘You will not replace us,’ in Charlottesville, Virginia. I wasn't going to run, as the senator knows, again for president. When I saw those people coming out of the woods and the fields in Virginia, in Charlottesville, carrying torches, shouting ‘You will not replace us,’ accompanied by white supremacists and carrying Nazi banners, that's when I said no, no, and I honest to God, those who know me, I wasn't going to run for certain, but I was going to be darned if I was going to let --- anyway,” he said.

Biden pointed to mass shootings in cities like Charleston, S.C.; El Paso, Texas; Pittsburgh, Pa.; Atlanta, Ga.; and Dallas, Texas as examples of white supremacy, which he called a “poison” that’s “running through our body politic.”

“It's been allowed to fester and grow right in front of our eyes. No more. I mean, no more. We need to say as clearly and forcefully as we can that the ideology of white supremacy has no place in America. None, and, look, the failure in saying that is going to be complicity. Silence is complicity. It’s complicity. We cannot remain silent,” he said.

Biden said that the nation’s strength comes from the idea that “we’re all children of God.”

“Life, liberty, our universal goods, gifts of God. We didn't get it from the government. We got it because we exist. We are called upon to defend them. The venom of the haters and their weapons of war, the violence in the words and deeds that stalk our streets, our stories, our schools. This venom, this violence, cannot be the story of our time. We cannot allow that to happen,” he said.

The president said that tragedy will strike again, and he called for keeping “assault weapons” off the streets.

“We’ve done it before. I did it when I passed a crime bill last time, and violence went down. Shootings went down. You can't prevent people from being radicalized to violence, but we can address the relentless exploitation of the internet to recruit and mobilize terrorism. We just need to have the courage to do that, to stand up,” Biden said.