Biden: Gas Prices Are Falling, But Not Fast Enough 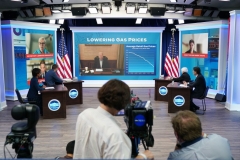 President Joe Biden speaks during a virtual meeting with members of his economic team on gas prices in the South Court Auditorium of the Eisenhower Executive Office Building, next to the White House, in Washington, DC on July 22, 2022. (Photo by MANDEL NGAN/AFP via Getty Images)

(CNSNews.com) - One day after being diagnosed with COVID, President Biden on Friday hosted a virtual economic briefing on gas prices from the White House residence, taking credit for gas prices dropping below $4 a gallon in “more than 30,000 gas stations in more than 35 states.”

“Let me start by apologizing for my voice. I feel much better than I sound. We’re meeting today on gas prices, and we have really good news. Gas prices are coming down. In fact, gas prices have fallen everyday this summer for 38 days in a row. You can find gas for $3.99 or less in more than 30,000 gas stations in more than 35 states,” he said, appearing on-screen.

“In some cities, it’s down more than $1 from last month. We’ve been working really hard to bring the price down. Four month ago, I gave an order to release 1 million barrels of oil per day, a day, from our nation's Strategic Petroleum reserve, and I led the world to coordinate the world's largest relief of oil reserves in history, including from other countries,” Biden said.

The president said that while the good news is that gas prices are falling, “it’s not happening fast enough.”

“We made progress, but prices are still too high, and so here's what I'm going to do to talk about today with all of you. We need to work on this,” Biden said.

To this end, the president announced that the administration would “look at ways to increase oil production from the existing wells and permits that exist today.”

“The industry has more approved permits for production on federal lands than they can possibly use. That's a fact. Let me say it again. They have more than they can use. So my message to these companies is, use the permits or lose them. Don't say we can't -- you don't have access,” Biden said.

“Second, I'm telling you, you're making record profits due to the war in Ukraine. Use those profits to increase production and refining. Don't use those profits to buy back your stocks and dividends. Look, thirdly, we'll talk about global price cap on Russian oil that I got our partners to last month at the G-7. They'll keep supply up and Putin's revenues down,” he said.

In the days and weeks ahead, I'm going to keep doing what I can to bring down the price of gas at the pump, but the real answer is to get to a clean energy economy as soon as possible, turn this into something positive,” the president said.

“That means cleaner renewable energy, more affordable electric vehicles, and clean energy manufacturing here in the United States. That’s how we’ll protect the climate and create jobs. I'll have more to say about this in our discussion, and I’ll have more in the coming days,” he said before turning the briefing over to Deese.