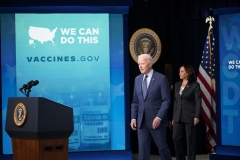 US President Joe Biden, with Vice President Kamala Harris, arrives to speak on Covid-19 response and vaccinations in the South Court Auditorium of the Eisenhower Executive Office Building, next to the White House, in Washington, DC, on June 2, 2021. (Photo by MANDEL NGAN/AFP via Getty Images)

(CNSNews.com) – The White House said Wednesday that President Joe Biden expects to raise the issue of ransomware attacks with Russian President Vladimir Putin when he meets with Putin in two weeks.

This comes as two more ransomware attacks targeted the meat company JBS and the Steamship Authority of Massachusetts, the company responsible for ferry service to Martha’s Vineyard and Nantucket. This represents the third major cyberattack this year.

The Russian-based group Darkside was credited with the cyberattack last month on the Colonial Pipeline Company.

Operations were interrupted at JBS, the world’s largest meatpacker. Meatpacking plants are expected to return to full capacity in the next couple days.

The Russian-based ransomware group REvil is being blamed for the cyberattack on JBS.

"Our systems are coming back online and we are not sparing any resources to fight this threat," JBS CEO Andre Nogueira said. "We have cybersecurity plans in place to address these types of issues and we are successfully executing those plans."

"The Woods Hole, Martha’s Vineyard and Nantucket Steamship Authority was the target of a ransomware attack early Wednesday, June 2, 2021," the Steamship Authority of Massachusetts said. "The Authority continues to work internally, as well as with federal, state and local authorities, to determine the extent and origin of the attack."

The president was asked whether Putin is testing him with these ransomware attacks after delivering remarks on COVID vaccinations Wednesday, to which Biden replied, “No.”

When asked whether he plans to retaliate against Russia for the cyberattack, the president said, “I’m looking closely at that issue.”

When asked whether Biden believes Putin can stop the ransomware attacks from occurring, White House Press Secretary Jen Psaki said, “I would say the president, President Biden certainly thinks that President Putin and the Russian government has a role to play in stopping and preventing these attacks.”

Psaki said she could not confirm the specifics of the ransom request to JBS or the origin.

“Obviously, our team is continuing to evaluate, and I would send you to the company for any specific questions about the ransom request. I will say that this attack is a reminder about the importance to private sector entities of hardening their cybersecurity, and ensuring they take the necessary steps to prepare for this threat, which we’ve seen rising even over the last few weeks,” she said.

“As it relates to actions we’re taking in the federal government, the president has launched a rapid strategic review to address the increased threat of ransomware, to include four major lines of effort: disruption of ransomware infrastructure and actors working closely with the private sector. We will work in partnership with them. That is something that this administration has done a bit differently than in the past,” the press secretary said.

The administration is also “working to find best practices, ensuring that private sector entities have a seat at the table, and we can work in close coordination,” Psaki said. The Biden administration is also working on “building international coalitions to hold countries who harbor ransom actors accountable.”

“This attack is an example of how this is not just a problem in the United States. These are actors that are working to get into systems around the world. This was a company obviously based in Brazil, but Australia was impacted also by this,” the press secretary said, adding that Biden is working to expand “cryptocurrency analysis.”

“Obviously this has been an increasing question out there to find and pursue criminal transactions, and reviewing our own ransomware policies. So this is an internal policy process essentially – one that’s looking at all of these entities within our national security economic team,” she said.