Biden: ‘Every Once in a While Something You Learn Makes You Viscerally Angry’ 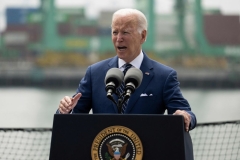 President Joe Biden speak about the economy and inflation from the deck of the USS Iowa at the Port of Los Angeles on June 10, 2022. (Photo by JIM WATSON/AFP via Getty Images)

(CNSNews.com) – President Biden on Friday blasted the consortium of foreign-owned shipping companies responsible for setting prices on shipping in the U.S., blaming them for raising the cost of shipping 1,000 percent.

“I have to admit to you. A lot of us elected officials have been in office for a while. Every once in a while something you learn makes you viscerally angry, like if you had the person in front of you, you’d would want to pop 'em. I really mean it. There are nine major ocean line shipping companies that ship from Asia to the United States, nine,” he said during a speech on inflation at the Port of Los Angeles.

“They form three consortium. These companies have raised their prices by as much as 1,000%. So everything coming from Asia, they get 90 some percent of it, the stuff coming from Asia. They raised it by 1,000%,” the president said.

“That's why I called on Congress to crack down on -- and they are foreign-owned, foreign-owned shipping companies that raised their prices while raking in $190 billion in profit, a seven-fold increase in one year. Seven-fold increase. 190 billion. The Senate passed legislation. I'm hopeful the House will enact soon to crack down on these companies as I’ve asked and lower the cost,” Biden said.

The president also continued to blame Russian President Vladimir Putin for the record high price of gas and also for high food prices, saying, “We’ve never seen anything like Putin's tax on both food and gas.”

“America should also understand our economy has unique strengths that we can build on. The job market is the strongest it's been since World War II, notwithstanding inflation. We added another 390,000 jobs last month, 8,700,000 new jobs since I took office. All time record, never that many jobs in that period of time,” he said.

“Unemployment rate is near historic lows. Millions of Americans are moving up to better jobs and better pay. Since I took office, families are carrying less debt on average in America, they have more savings than they’ve had, and we are doing it all while cutting the federal deficit by $1.7 trillion this year and $320 billion last,” Biden said.

“If I hear one of my MAGA friends once again talk about debt and deficits, I'm going to be good. They increased the deficit by 2 trillion bucks, anyway, another story,” the president said.

“This the largest decline in American history. Because of the progress, America can tackle inflation from a position of strength unlike any other country in the world, because every country in the world is getting a big bite and piece of inflation, worse than we are in the vast majority of countries around the world. Make no mistake about it,” he said.

“I understand inflation is a real challenge to American families. Today's inflation report confirm what Americans already know. Putin's price hike is hitting America hard. Gas prices at the pump, energy and food prices account for half of the monthly price increases since May,” Biden said.

“Inflation outside of energy and food – what the economists call core inflation - moderated the last two months, not enough, but it moderated. It’s come down, and we need it to come down much more quickly,” the president said.

At the end of his speech, a reporter asked the president if he planned to go after Exxon’s profits.

“We are going to make sure that everybody knows Exxon's profits. Why don’t you tell them what the profits were this quarter? Exxon made more money than God this year. And by the way, nothing has changed. And by the way, one thing I want to say about the oil companies. You talk about how they have 9,000 permits to drill. They are not drilling,” Biden said.
“Why aren't they drilling? Because they make more money not producing more oil, the price goes up, number one. And number two, the reason they’re not drilling is they are buying back their own stock, which should be taxed, quite frankly, buying back their own stock and making no new investments, so I always thought Republicans were for investment. Exxon, start investing, start paying your taxes,” he said.