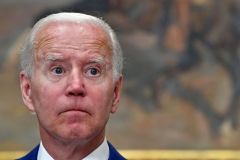 President Joe Biden speaks on Covid-19 vaccines for children under 5 at the Roosevelt Room of the White House in Washington, DC on June 21, 2022. (Photo by NICHOLAS KAMM/AFP via Getty Images)

(CNSNews.com) - President Joe Biden called Chevron CEO Michael Wirth “mildly sensitive” after the executive said that the administration’s attempts “criticize” and “vilify” the oil and gas industry are “not beneficial.

"Your administration has largely sought to criticize, and at times vilify, our industry," Wirth wrote in a letter to Biden. "These actions are not beneficial to meeting the challenges we face."

“A question on the Chevron CEO’s complaint today. He said that your administration has largely criticized the oil and gas industry, at times vilified it and that the administration would need to take a change in approach in order to make progress on producing energy prices and to increase supply. Do you have a reaction to that?” a reporter asked Biden after the president delivered remarks on COVID-19 vaccines for children under five.

“He’s mildly sensitive. I didn’t know they’d get their feelings hurt that quickly. Look, we need more refining capacity. This idea that they don’t have oil to drill and to bring up is simply not true. This piece of the Republicans talking about Biden’s shutdown feels wrong,” the president said.

“There are 9,000 of them, okay? So then we ought to be able to work something out, whereby they’re able to increase refining capacity and still not give up on transitioning to renewable energy. They’re both within the realm of possibility,” Biden said.

NBC White House Correspondent Kelly O’Donnell asked the president whether he thinks Congress would support a federal gas tax holiday and what he thinks about using funds that are set aside for road repair and infrastructure.

O’DONNELL: If you were to decide to go for a federal gas tax holiday, do you believe Congress would support that? And how would you feel about the fact that those funds are used for something that is a big priority for you - repair of roads and infrastructure and all of that?

O’DONNELL: So it would be worth it for you…

BIDEN: Sure, it’s not like– it’s not like before. Look, it will have some impact, but it's not going to be impacting major road construction and major repairs."

O’DONNELL: Sounds like you may have made a decision?

BIDEN: Let me put it this way. I'm in the process, I'll have a decision before the week is out, but you asked me an explicit question about whether or not, how would I feel, and is it going to in fact make it difficult to maintain our roads. The answer is we have plenty of capacity to do that.