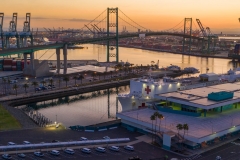 The USNS Mercy Navy hospital ship is seen at dawn in the Port of Los Angeles after it arrived to assist with the coronavirus pandemic on March 28, 2020 in San Pedro, United States. (Photo by David McNew/Getty Images)

(CNSNews.com) - President Joe Biden announced Wednesday the steps his administration has taken to address the supply chain bottlenecks, beginning with the operations at two ports in California - Los Angeles and Long Beach - which are among the largest in the world and are responsible for 40 percent of shipping containers that are imported into the United States.

“They’re going to help speed up the delivery of goods all across America. After weeks of negotiation and working with my team and with the major union and retailers and freight movers, the Ports of Los Angeles — the Port of Los Angeles announced today that it’s going to be — begin operating 24 hours a day, 7 days a week,” the president said.

“This follows the Port of Long Beach’s commitment to 24/7 that it announced just weeks ago - 24/7 system — what most of the leading countries in the world already operate on now, except us, until now. This is the first key step toward moving our entire freight transportation and logistical supply chain, nationwide, to a 24/7 system,” Biden said.

“And here’s why it matters: Traditionally, our ports have only been open during the week — Monday through Friday — and they’re generally closed down at nights and on weekends. By staying open seven days a week, through the night and on the weekends, the Port of Los Angeles will open — over 60 extra hours a week it will be open,” he said.

“In total, that will almost double the number of hours that the port is open for business from earlier this year. That means an increase in the hours for workers to be moving cargo off ships and onto trucks and railcars to get to their destination, and more than that, the night hours are critical for increasing the movement of goods because highways — highways are less crowded in the evening — at night," the president said.

"In fact, during off-peak hours in Los Angeles, cargo leaves the port at a 25 percent faster pace than during the day shift. So, by increasing the number of late-night hours of operation and opening up for less-crowded hours when the goods can move faster, today’s announcement has the potential to be a gamechanger," Biden said.

“We need the major retailers who ordered the goods and the freight movers who take the goods from the ships to factories and to stores to step up as well,” the president said. “These private sector companies are the ones that hire the trucks and railcars and move the goods. On this score, we have some good news to report as well.”

Biden said that Walmart is “committing as much as a 50 percent  increase in the use of off-peak hours over the next several weeks.”

“Additionally, FedEx and UPS, two of our nation’s biggest freight movers, are committing today to significantly increase the amount of goods they are moving at night. FedEx and UPS are the shippers for some of our nation’s largest stores, but also ship for tens of thousands of small businesses all across America. Their commitment to go all in on 24/7 operations means that businesses of all sizes will get their goods on shelves faster and more reliably,” he said.

Biden said that together FedEx and UPS alone move up to 40 percent of packages in America.

He said that other companies like Target, Home Depot, and Samsung have agreed to step up their activities in off-peak hours at the ports as well.

The president said that terminal operators, railways, trucking companies, shippers, and other retailers also have to step up.

“Strengthening our supply chains will continue to be my team’s focus. If federal support is needed, I will direct all appropriate action, and if the private sector doesn’t step up, we’re going to call them out and ask them to act, because our goal is not only to get through this immediate bottleneck, but to address the longstanding weaknesses in our transportation supply chain that this pandemic has exposed,” he said.