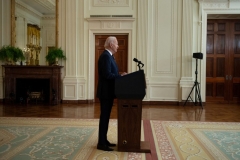 (CNSNews.com) - President Biden said Thursday that he has authorized additional sanctions against “Russian banks that together hold around $1 trillion in assets” and he has cut off the country’s “largest bank that holds more than one third of Russia’s banking assets by itself” from the U.S. financial system.

“The Russian military has begun a brutal assault on the people of Ukraine without provocation, without justification, without necessity. This is a premeditated attack. Vladimir Putin has been planning this for months as we have been saying all along. He moved more than 175,000 troops, and military equipment and positions along the Ukrainian border,” Biden said.

“He built-up field hospitals, which tells you all you need to know about his intentions all along. He rejected every good faith effort the United States and our allies and partners made to address our mutual security concerns through dialogue to avoid needless conflict and overt human suffering. For weeks -- for weeks, we have been warning that this would happen, and now it's unfolding largely as we predicted,” he said.

The president said he’s issuing “additional strong sanctions and new limitations on what can be exported to Russia” which will “impose severe costs on the Russian economy, both immediately and over time.”

“We have purposefully designed these sanctions to maximize the long-term impact on Russia and to minimize the impact on the United States and our allies,” he said.

In today’s actions, we have now sanctioned Russian banks that together hold around $1 trillion in assets. We’ve cut off Russia’s largest bank — a bank that holds more than one third of Russia’s banking assets by itself — cut it off from the U.S. financial system, and today, we’re also blocking four more major banks.

That means every asset they have in America will be frozen. This includes V.T.B., the second-largest bank in Russia, which has $250 billion in assets. As promised, we’re also adding names to the list of Russian elites and their family members that are sanctioning — that we’re sanctioning as well.

As I said on Tuesday, these are people who personally gain from the Kremlin’s policies, and they should share in the pain. We will keep up this drumbeat of those designations against corrupt billionaires in the days ahead.

On Tuesday, we stopped the Russian government from raising money from U.S. or European investors. Now, we’re going to apply the same restrictions to Russia’s largest state-owned enterprises — companies with assets that exceed $1.4 trillion.

Some of the most powerful impacts of our actions will come over time as we squeeze Russia’s access to finance and technology for strategic sectors of its economy and degrade its industrial capacity for years to come.