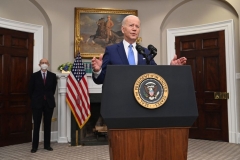 President Joe Biden, with retiring US Supreme Court Justice Stephen Breyer, speaks in the Roosevelt Room of the White House in Washington, DC, on January 27, 2022. (Photo by SAUL LOEB/AFP via Getty Images)

(CNSNews.com) – President Joe Biden announced on Thursday that Supreme Court Justice Stephen Breyer is retiring after four decades, and his successor will be a black woman, which he will nominate by the end of February.

“Choosing someone to sit on the Supreme Court I believe is one of them most serious constitutional responsibility a president has. Our process is going to be rigorous. I will select a nominee worthy of Justice Breyer's legacy of excellence and decency. While I've been studying candidates’ backgrounds, I've made no decision except one,” the president said.

“The person I will nominate will be someone with extraordinary qualifications, character, experience and integrity, and that person will be the first black woman ever nominated to the United States Supreme Court. It's long overdue, in my view. I made that commitment during the campaign for president, and I will keep that commitment,” he said.

“I will fully do what I said I’d do. I will fulfill my duty to select a justice not only with the Senate's consent but with its advice. You heard me say in other nomination processes that the Constitution says seek the advice and consent, but the advice as well of the Senate. I'm going to invite senators from both parties to offer their ideas and points of view,” Biden said.

Vice President Kamala Harris will also play a key role in advising the president on his SCOTUS nominee, he said.

“I will also consult with leading scholars and lawyers, and I'm fortunate to have advising me in this selection process Vice President Kamala Harris. She’s an exceptional lawyer, former attorney general of the state of California, a former member of the Senate Judiciary Committee. I will listen carefully to all the advice I'm given, and I’ll study the records and former cases carefully,” Biden said.

“I’ll meet with potential nominees, and it's my intention, my intention to announce my decision before the end of February. I have made no choice at this point. Once I select a nominee, I’ll ask the Senate to move promptly on my choice,” he said.

“In the end, I will nominate a historic candidate, someone who is worthy of Justice Breyer's legacy and someone who, like Justice Breyer, will provide incredible service on the United States Supreme Court,” the president said.