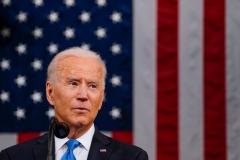 President Joe Biden addresses a joint session of Congress at the US Capitol in Washington, DC, on April 28, 2021. (Photo by MELINA MARA/POOL/AFP via Getty Images)

(CNSNews.com) - President Joe Biden announced Tuesday that his administration is on track to fully vaccinate 160 million Americans by the end of this week.

“Because of our war time effort to administer 300 million shots in arms in 150 days, more than 182 million Americans have received at least one shot, including nearly 90 percent of seniors and 70 percent of adults over the age of 27. By the end of this week, we’ll have reached the mark of 160 million fully vaccinated Americans, and that’s a goal I set in March that I’m thrilled we’re gonna hit just a few days after July the 4th,” he said.

“We are continuing to wind down the mass vaccination sites that did so much in the spring to rapidly vaccinate those eager to get their first shot and their second shot for that matter if they needed a second,” Biden said.

“Now we need to go community by community, neighborhood by neighborhood, and oftimes door-to-door literally knocking on doors to get help to the remaining people protected from the virus,” the president said.

His administration is focused on five ways to get people vaccinated.

“As we shift from these centralized mass vaccination sites where we were doing thousands of people a day, we’re going to put even more emphasis on getting vaccinated in your commmunity close to home, conveniently at a location you’re already familiar with,” Biden said.

First, he said the effort includes local pharmacies, which people may already have dealt with that allow you to walk in and get vaccinated without an appointment.

“Second, my team is going to place renewed emphasis on getting the vaccines to more and more family doctors and health care providers so more Americans can get their shot at their doctor’s office from the folks that they know and they trust the most,” the president said.

“Third, thing we’re going to do. We’re going to step up efforts to get vaccines to your family doctors and other doctors who serve younger people, so that adolescents age 12 to 18 can get vaccinated as they go for back to school check-ups or getting ready for their physicals they need for fall sports," Biden said.

“Fourth, we’re also intensifying our efforts to meet people where they are outside of their neighborhoods, pharmacies and doctors offices. This includes continued work with employers to make vaccine shots available at work on the work sites if possible, and/or give their employees paid time off to get vaccinated at nearby facility, and fifth, and finally, we’re sending out more mobile clinic units out there, to help people at special events, summer festivals, sporting events, as well as places of worship wherever we can find people gathered," he said.