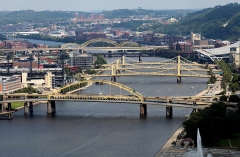 “You know the old saying about my way or the highway? I take the highway, because what Joe Biden is proposing here is really a slush fund of liberal spending payoff to unions and force feeding the Green New Deal on the American people. Real infrastructure are roads and bridges, and yet that’s less than 6% money on a massive spending bill,” he told Fox Business’s “Mornings with Maria Bartiromo.”

“There’s more money in this for electric vehicles than there is for roads and bridges and ports and airports and waterways, combined, so when you take a look at all of this spending, you say is this what the American people want in infrastructure? And I say it is not,” Barrasso said.

“That’s what we need to do, is actual infrastructure to help rebuild our bridges and our roads - those sort of things, not all of this unnecessary liberal spending, and you know, Maria, you’ve said it yourself. It’s all going to be paid for by raising taxes on the American people,” the senator said.

Barrasso said things included in the bill like Medicaid expansion and forced unionization have nothing to do with infrastructure. He also said the bill includes plans for a green schools, which would transform cafeterias requiring schools to serve “green meals” that are served on recyclable food trays.

“The largest piece of this legislation - $400 billion dollars - is on Medicaid expansion and this forcing of those who are participating in that, into unions. The other part of this is also that this draws a target, on carbon-based fuels, oil, gas, American energy and a million people who have those jobs. This is going to raise costs for how you heat your home and what it costs to drive and buy food,” he said.

“It’s going to make us more dependent on foreign sources of energy, and, Maria, one of the things that has really struck me, is they have 100 billion dollars in this for a green school initiative, and you dig into it and say so what are they going to do for 100 billion dollars?” the senator said.

“They’re going to remake the cafeteria so they serve green meals and that they get rid of paper products, and the trays that you get your food on, they need to be recyclable. This proposal it’s radical, extreme. It’s dangerous. It’s scary. In the past, you’ve reported on the Solyndra debacle in the Obama administration. This is going to be Solyndra on steroids,” Barrasso said.

He said that there are many things that Congress can do on infrastructure. He pointed out that when he chaired the Environmental Public Works Committee last year, there was a bipartisan unanimous vote on an infrastructure bill that funds roads, bridges, and ports.

“We also did safe drinking water and water resources as part of all of this again unanimously, people working together. We sent that to the House for their consideration, and they came back with again the Green New Deal under Nancy Pelosi. There’s win to be had here on the things that we all agree is infrastructure,” the senator said.

“You add broadband, on to that, but not this extraneous spending on things that are so extreme that even there are Democrats that are saying, hey hold on, you’re going away too far,” he said.

“When they talk about bipartisan, they’re not even looking for Republican votes in the House or the Senate anymore. They can find some mayor in some community who’s a Republican, who may be for something and they say now it is bipartisan. It’s really not. The reconciliation if they do it again will be done strictly along party lines,” the senator said.

“We will introduce amendments to it to do exactly what you said to finish the wall. We could see right there at the border where the wall construction had stopped. There are parts of the wall that are ready to go up, but the day Joe Biden became president he said, ‘Stop. Don't put up these remaining areas’ that we paid for. The raw materials are there, ready to go up,” he said.

“We’re going to call the Democrats on that on the floor. If they try reconciliation, we’re going to try to put right there into the bill, finish the wall. We want it done,” Barrasso said.

The senator said he doesn’t see “any Republican supporting this massive spending by the Biden administration, where less than six percent of it goes for roads and bridges and all of this money goes for extraneous, Maria, over two trillion dollars.”

“We just spent 1.9 trillion dollars on a so-called coronavirus relief bill where only nine percent of the money had to do with actual medical care, and 91% was for other things. They name it one thing, do another thing and spend massive amounts of money, putting us as a nation into debt. Our kids and grandkids are going to be carrying this heavy burden for generations to come,” he said.