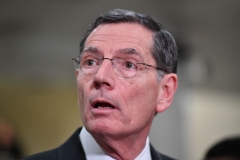 (CNSNews.com) - Sen. John Barrasso (R-Wyo.) gave the Democrats’ COVID relief bill a failing grade, because it fails to do what it’s supposed to do, which is getting people back to work, getting kids back in school, “and getting the virus behind us.”

“This whole coronavirus so-called relief bill, look, it is packed with pork and there is bipartisan opposition to what you just talked about in terms of raising the minimum wage. This is a piece of legislation that is a wish list of liberal Democrats for a long, long time,” Barrasso told Fox Business’s “Mornings with Maria Bartiromo” on Tuesday.

“You know what's loaded in there - payoffs for big cities and bailouts of the blue states. money for flailing pension funds. This whole bill, in my opinion, gets an F grade, because it fails to do what it's supposed to do which is get people back to work, getting kids back to school and getting the virus behind us,” he said.

“The specifics of the $15 minimum wage, that certainly doesn't work in my home state of Wyoming. Small businesses that I talk to and the owners say, look, if they do that as a mandate out of Washington, we're going to have to just close down or lay off people. That's why the Congressional Budget Office says 1.4 million Americans will lose their jobs if they do what these progressive Democrats, liberal Democrats, scary Democrats are trying to do,” the senator said.

Barrasso said that Rep. Debbie Dingell, who appeared on the show Monday, had nothing to say when host Maria Bartiromo pointed out that only $1 out of $11 of the COVID relief bill’s spending actually goes towards coronavirus, “and you’re still keeping the school closed.”

“And, yes, the Democrats want to raise taxes. That is not a surprise, never has been. The chief of staff of the White House calls this coronavirus relief bill, he says it is the most progressive piece of domestic legislation he said in a generation. That's how you get the kind of money in there for Nancy Pelosi's -- what I call the tunnel of love to Silicon Valley,” Barrasso said.

“There are terrible things in this piece of legislation. The more people find out about it, the worse it's going to be. You're also right about the Democrats wanting to raise taxes. This is a continuation of Elizabeth Warren's presidential campaign,” the senator added.

When asked whether there’s anything Barasso and his Senate Republican colleagues can do to stop these progressive policies, he said, “Well, we're fighting every day to stop these ridiculous policies that are -- they're not just radical and extreme.

“They're dangerous, and they are scary and what Elizabeth Warren is talking about is not just raising taxes, she's talking about actually going out there and confiscating wealth, money that people have already earned and paid taxes on. So it's tax raises on steroids. This is awful,” the senator said.

“In terms of energy, look, Joe Biden has taken an axe to American energy, and he's chopping into paychecks all across the country. In Wyoming, we produce energy. We consume energy. We do it responsibly. Take a look at what's happened to gas prices since the first of the year. Gas prices are up 50 cents a gallon. Consumers are going to be paying,” Barrasso said.

“First, the Democrats want to raise taxes. Second, they're paying at the pump. They're going to be paying to heat their homes. All of these things are having a terrible impact on mom and pop at home trying to get the kids back to school,” he said.

Barrasso said that with Sen. Elizabeth Warren’s (D-Mass.) Ultra-Millionaire Tax Act, she has “her foot pressed pedal to the metal” on the road to socialism.

“That's where the Democrats want to take this country, Republicans are fighting them every day on this to let Americans keep more of their hard-earned money. That's what the fight's about in terms of the future for our country,” he said.