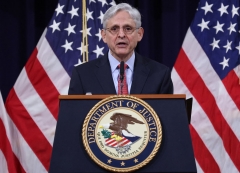 US Attorney General Merrick Garland speaks during an event at the Justice Department on June 15, 2021 in Washington, DC. - Garland addressed domestic terrorism during his remarks. (Photo by WIN MCNAMEE/POOL/AFP via Getty Images)

(CNSNews.com) – Attorney General Merrick Garland on Tuesday unveiled the Biden administration’s plan to combat domestic terrorism, noting that the DOJ does not prosecute people for their beliefs, and while some have labeled “those perceived as political threats to the ruling order” as extremists or terrorists, “there is no place for partisanship in the enforcement of the law.”

The attorney general warned that the DOJ does not prosecute people for their beliefs and that it is “focused on violence, not ideology.”

“First, we are focused on violence not on ideology. In America, espousing a hateful ideology is not unlawful. We do not investigate individuals for their First Amendment-protected activities,” he said.

“In 1976, Attorney General Levi established the guidelines that formed the foundation for a detailed set of rules that continued to govern the FBI's conduct of investigations today. In doing that he made clear that, ‘government monitoring of individuals or groups because they hold unpopular or controversial political views is intolerable in our country,’” Garland said.

“As a national strategy makes clear, safeguarding our country's civil rights and liberties is itself a vital national security imperative. We do not prosecute people for their beliefs. Across the world extremists or terrorist labels have at times been affixed to those perceived as political threats to the ruling order, but there is no place for partisanship in the enforcement of the law. The Justice Department will not tolerate any such abuse of authority,” he said.

The attorney general noted that the number of open federal investigations into domestic terrorism “has increased significantly.”

“According to an unclassified summary of the March intelligence assessment, the two most lethal elements of the domestic violence extremist threat are racially or ethically motivated violent extremists and militia violent extremists. In the FBI's view, the top domestic violent threat comes from racially or ethnically, specifically those who advocated for the superiority of the white race,” Garland said.

“The March assessment concluded that the militia violent extremist threat, which is described as those who, ‘take overt steps to violently resist or facilitate the overthrow of the United States government in support of their belief that the United States government is purportedly exceeding its constitutional authority’ also increased last year and will almost certainly continue to be elevated throughout 2021,” he said.

“Particularly concerning is the March assessment’s observation that the threat from lone offenders or small cells pose a significant detection and disruption challenges because of those actors' capacity for independent radicalization to violence, ability to mobilize discreetly, and access to firearms,” the attorney general said.

The DOJ has begun to “to reinvigorate the domestic terrorism executive committee,” which was created by former Attorney General Janet Reno in the aftermath of the Oklahoma City bombing,” Garland said.

“Our current effort comes on the heels of another large and heinous attack. This time, the January 6th assault on our nation's capitol. We have now, as we had then, an enormous task ahead. To move forward as a country, to punish the perpetrators, to do everything possible to prevent similar attacks, and to do so in a manner that affirms the values on which our justice system is founded and upon which our democracy depends,” he said.

“The resolve and dedication with which the Justice Department has approached the investigation of the January 6th attack reflects the seriousness with which we take this assault on the mainstay of our democratic system, the peaceful transfer of power,” the attorney general said, adding that over 480 people have been arrested and hundreds of charges have been brought “against those who attacked law enforcement officers, obstructed justice, and used deadly and dangerous weapons to those ends.”