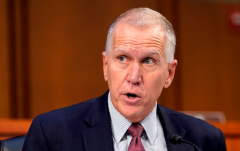 At the U.S. Capitol on Wednesday, CNS News asked the senator, “The federal deficit through the first 11 months of this fiscal year was $2.7 trillion and the federal debt is now over $28 trillion -- will President Biden or Speaker Pelosi ever balance the budget?”

In a follow-up question, CNS News asked, “Do you believe they’ll take any efforts to?”

“No, I mean, you have to look back only to the $1.9 trillion package,” said Tillis. “Last year, we had five bipartisan measures that recognized the crisis that COVID put us in fiscally and from a public health perspective, and their first act when they came into the majority was a $1.9 trillion COVID relief package that had less than 10% focused on COVID relief.”

“So, if they were serious about bending the curve, they would not have implemented the bill that’s already passed, and now proposing a $3.5 trillion package that also has a lot of hidden taxes and fees that are going to hurt the people most economically challenged,” he said.