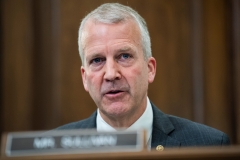 (CNS News) -- When asked if President Joe Biden would ever balance the budget, Senator Dan Sullivan (R-Alaska) said, “Not at the rate they’re spending.”

At the U.S. Capitol on Tuesday, CNS News asked the senator, “The federal deficit through the first 11 months of this fiscal year was $2.7 trillion and the federal debt is now $28 trillion. Will President Biden ever balance the budget?”

Sullivan replied, “Oh, not at the rate they’re spending, which is why this debt ceiling issue is going to be something that the Democrats are going to have to deal with themselves. They have the power to deal with it, they should deal with it.”

In a follow-up question, CNS News asked, “Do you believe they’ll make any efforts to deal with it?”

“No, not right now,” he said. “Not until we have a change of power in Washington.”

The U.S. Treasury released the total outstanding public debt on Sept. 17, which was $28.4 trillion.