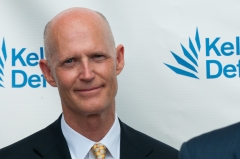 (CNS News) -- When asked if President Joe Biden or House Speaker Nancy Pelosi (D-Calif.) would ever balance the budget, Senator Rick Scott (R-Fla.) said, “You have to balance your budget – right? -- every month, businesses have to, and the government’s going to have to eventually.”

He also stressed the Democrats’ “reckless government spending” is hurting the “poorest families in our country.”

At the U.S. Capitol on Sept. 22, CNS News asked the senator, “The federal deficit through the first 11 months of this fiscal year was $2.7 trillion and the federal debt is now over $28 trillion, -- will President Biden or Speaker Pelosi ever balance the budget?”

Scott replied, “I’ve never seen them balance the budget. I mean, this is the craziest idea, you have to balance your budget – right? -- every month, businesses have to, and the government’s going to have to eventually. It doesn’t make any sense.”

“What the Democrats want us to do is just give them a blank check that they can borrow whatever they want to borrow,” said Scott.  “Well, we’re already seeing inflation just hurting the poorest families in our country, and the people on fixed incomes, you know, the wages are not standing up with inflation.”

“I grew up in a poor family,” Scott continued, “I watched my mom struggle to put food on the table, and that’s exactly what the Democrats are doing to the poorest families in this country right now with this reckless government spending.”

According to the U.S. Treasury, the total outstanding public debt on Sept. 23 was $28.42 trillion.