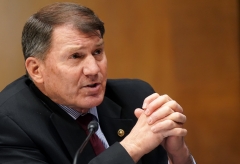 (CNS News) -- When asked if President Biden would secure the southern border, Senator Mike Rounds (R-S.D.) said, “He probably doesn’t have the political clout within his own party to get that accomplished.”

At the U.S. Capitol on Thursday, CNS News asked the senator, “Will President Biden secure the southern border?”

Rounds responded, “He hasn’t so far, and I’m afraid that he probably doesn’t have the political clout within his own party to get that accomplished.”