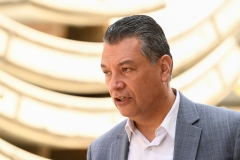 At the U.S. Capitol on Sept. 23, CNS News asked the senator, “The federal deficit from the first 11 months of this fiscal year was $2.7 trillion and the federal debt is now over $28 trillion -- will President Biden or Speaker Pelosi ever balance the budget?”

In a follow-up question, CNS News asked, “Will they take any action to?”

According to the U.S. Treasury, the total outstanding public debt on Sept. 23 was $28.42 trillion.