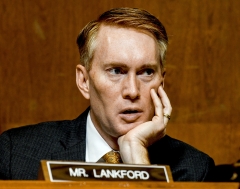 (CNS News) -- When asked if he believed the Biden administration would take any action to balance the budget, Senator James Lankford (R-Okla.) said, “No.”

At the U.S. Capitol on Tuesday, CNS News asked the Senator, “The federal deficit through the first 11 months of this fiscal year was $2.7 trillion and the federal debt is now $28 trillion. Will the Biden administration do anything to balance the budget?”

Lankford replied, “Not so far, they haven’t.”

In a follow-up question, CNS News asked, “Do you believe they will take any action to?”

The United States Treasury released the total outstanding public debt on Sept. 17, which was $28.4 trillion.