Sen. Joni Ernst: ‘I Am Not Confident’ About Biden’s Vetting of Afghan Refugees 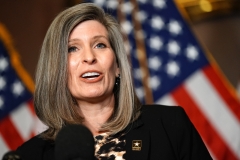 (CNS News) -- When asked if she has confidence in the  Biden administration’s vetting of Afghan refugees and determining whether they pose a threat to the U.S., Senator Joni Ernst (R-Iowa) said, "I am not confident about it, and that’s what I worry about.”

At the U.S. Capitol on Wednesday, CNS News asked Ernst, “Are you confident the Biden administration has successfully vetted and identified the Afghans they brought into the U.S., and that none will pose a threat here?”

Ernst responded, “I am not confident about it, and that’s what I worry about, that the Biden State Department has fallen down in so many different areas.”

“We should have been working this issue much earlier, before the withdrawal, and they didn’t do that,” she said. “We had warned about this early on -- Senator Jeanne Shaheen and I, and a number of other senators, went to the White House and spoke with the president’s national security team. And we asked them to get on top of this and to get it started right away, and they drug their feet on it.”

“And when you have a mass emergency evacuation, this mass exodus of people out of Afghanistan, and you’re not able to properly vet them, then we end up with people that maybe shouldn’t have come through the system,” said the senator. “So I am very concerned about it. People need to be properly vetted before their feet hit the United States.”