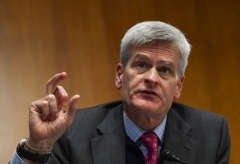 (CNS News) -- When asked if the Biden administration would do anything to balance the budget, Senator Bill Cassidy (R-La.) said, “No," the are "only interested in driving" the public debt "higher.”

At the U.S. Capitol on Tuesday, CNS News asked the senator, “The federal deficit through the first 11 months of this fiscal year was $2.7 trillion, and the federal debt is now over $28 trillion. Do you believe President Biden will do anything to balance the budget?”