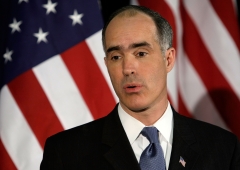 (CNS News) -- When asked whether President Joe Biden or House Speaker Nancy Pelosi (D-Calif.) would ever balance the budget, Senator Bob Casey (D-Penn.) said, “With four years of a Republican president and a lot of that time with a Republican Congress, there’s a big debt.”

At the U.S. Capitol on Wednesday, CNS News asked the senator, “The federal deficit through the past 11 months of this fiscal year was $2.7 trillion and the federal debt is now over $28 trillion -- will President Biden or Speaker Pelosi ever balance the budget?”

Casey replied, “Well, one problem that you have right now is with four years of a Republican president and a lot of that time with a Republican Congress, there’s a big debt, and that’s why we’ve got to pay that bill.”

In a follow-up question, CNS News asked, “Do you think either of them will take an action to balance the budget?”

“Well, that plays out over time with different budgets,” said the senator. “But when you have a once-in-a-hundred year pandemic and the economy freezes up, people can’t go to work and you’ve got to be able to invest in people.”

“But I think, over time, there’s going to be a lot of efforts,” he added, “I know I have a concern about getting debt levels down, but I’ll let the administration and the speaker speak for themselves.”

The continuing resolution passed this week is separate legislation and will fund the government only through Dec. 3. The $3.5 trillion package is still being hashed-out in the Senate, although approximately $1 trillion for infrastructure has been agreed upon.