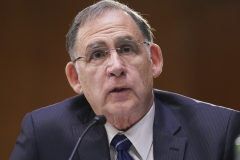 (CNS News) -- When asked if he believed the Biden administration would ever balance the budget, Senator John Boozman (R-Ark.) said, “They appear to be doing just the opposite with this $3.5 to $4.2 billion dollar spending bill.”

At the U.S. Capitol on Tuesday, CNS News asked the senator, “The federal deficit in the first 11 months of this fiscal year was $2.7 trillion, and the federal debt is now $28 trillion. Will the Biden administration ever balance the budget?”

In a follow-up question, CNS News asked, “Do you think [the Biden administration] will take any efforts [to balance the budget]?”

“They appear to be doing just the opposite with this $3.5 to $4.2 trillion spending bill,” said Boozman. “Not only is it going to increase the deficit, but it will also be very, very inflationary.”

The spending bill Boozman referenced is the $3.5 trillion budget blueprint that the House narrowly passed in a 220-212 vote, reported the Wall Street Journal.