Sen. Blumenthal: Biden Doing ‘As Good a Job as Can Be Done' Vetting Afghan Refugees 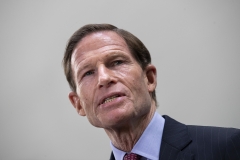 (CNS News) -- When asked if he was confident that the Biden administration was properly vetting Afghan refugees so that none will pose a threat in the U.S., Sen. Richard Blumenthal (D-Conn.) said, “They are doing as good a job as can be done under the circumstances.”

At the U.S. Capitol on Tuesday, CNS News asked the senator, “Are you confident the Biden administration has successfully identified and vetted the Afghans it brought into the country, and that none will pose a threat here?”

Blumenthal said, “They are vetting them, and I’m confident they are doing as good a job as can be done under the circumstances.”