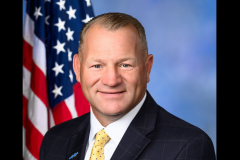 At the U.S. Capitol on Thursday, CNS News asked the congressman, “The Build Back Better Act the House Budget Committee approved is 2,465 pages long, will you read the entire bill before voting on it?”

Nehls replied, “When are we voting? Good question, right? So, if that’s going to be a part of the vote this week, which has got to be either today or tomorrow morning from my understanding, how long would it take you to read 2,450 pages?”

“I’m assuming we don’t have it because they probably don’t want us to see what’s in it,” said Nehls. “When you go through 2,400 pages, I’m sure there’s a lot of, I’m going to say, unnecessary junk and garbage in it not even related to infrastructure.’

“So, they’ll probably try to keep that document hidden far away from my eyes because they certainly do not want to give me the time to expose what’s in it,” he added.

Senate Democrats Joe Manchin (D-W.Va.) and Kyrsten Sinema (D-Ariz.) have repeatedly said they will not vote for a $3.5 trillion spending bill.