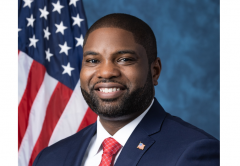 (CNS News) -- When asked if he would read all 2,465 pages of the Build Back Better Act before voting on it, House Rep. Byron Donalds (R-Fla.) said, “I’ll try to, I mean -- look man, I’ve never liked the way this place does those things.”

At the U.S. Capitol on Wednesday, CNS News asked the congressman, “The Build Back Better Act the House Budget Committee approved is 2,465 pages long, will you read the entire bill before voting on it?”

Donalds replied, “I’ll try to, I mean, look man, I’ve never liked the way this place does those things. I’m going to try to. The key thing is trying to make sure you get through as many of the provisions as you can, but from what I’ve seen, I’m already not supporting that bill.”

Pelosi reportedly was trying to get a vote on the legislation on Thursday, but that was delayed because the "progressive" Democrats (radical left-wing) in the House do not support breaking the legislation into two separate bills and are holding the line on the $3.5 trillion price tag.