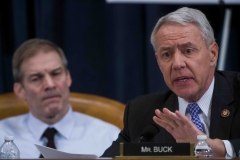 (CNS News) -- When asked if he would read all 2,456 pages of the Build Back Better Act before voting on it, House Rep. Ken Buck (R-Col.) said he would not have time to read it and would never for a bill he had not read.

On Thursday at the U.S. Capitol, CNS News asked the congressman, “The Build Back Better Act the House Budget Committee approved is 2,465 pages long, will you read the entire bill before voting on it?”

Buck replied, “I will never vote yes on a bill that I haven’t read, and I will not have time to read that.”