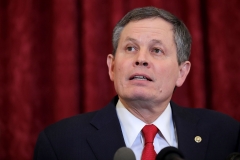 (CNS News) -- When asked if Facebook should be allowed to restrict speech on their platform, Senator Steve Daines (R-Mont.) said, “No!”

At the U.S. Capitol on Thursday, CNS News asked the senator, “Should Facebook be allowed to restrict speech on their platform?”