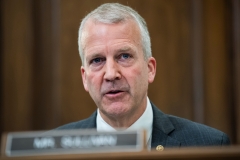 (CNS News) -- When asked if he agrees with Pope Francis’ statement that abortion is murder, Senator Dan Sullivan (R-Alaska) said, “I certainly agree that it is.”

At the U.S. Capitol Wednesday, CNS News asked the senator, “Pope Francis recently said that abortion is ‘truly murder,’ do you agree with him?”

Sullivan replied, “I’m a pro-life senator, so I certainly agree that it is.”