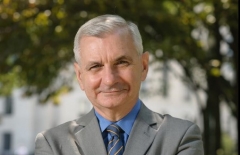 (CNS News) -- When asked if he agreed with Pope Francis’ statement that abortion is “truly murder,” Senator Jack Reed (D-R.I.) said, “I’m not going to comment on the theology of that.”

At the U.S. Capitol on Wednesday, CNS News asked the senator, “Pope Francis recently said that abortion is ‘truly murder,’ do you agree with him?”

Reed, a Catholic, replied, “I’m not going to comment on the theology of that.”

CNS News followed-up asking, “Is the unborn child killed by an abortion a human being?”

Reed said, “I’m not going to comment. I think the constitutional law at this point recognizes Roe v. Wade’s decision and the opportunity for women to make choices.”