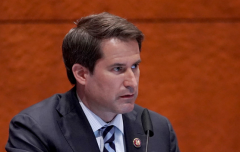 (CNS News) -- When asked if he would read all 2,465 pages of the Build Back Better Act, Rep. Seth Moulton (D-Mass.) said, “That’s why we have teams to read and digest the bills. No one here ever reads an entire bill.”

At the U.S. Capitol on Tuesday, CNS News asked Moulton, “The Build Back Better Act the House Budget Committee approved was 2,465 pages long. Will you read the entire bill before you vote?”

Moulton responded, “No I won’t, because your question shows some real naivete about politics--because that’s why we have teams to read and digest the bills. No one here ever reads an entire bill.”

The $3.5 trillion Build Back Better Act was approved by the House Budget Committee on Saturday. Committee chairman, Representative John Yarmuth (D-Ky.), explained the purpose of the bill in a press release.

House Speaker Nancy Pelosi (D-Calif.) sent a letter to her Democratic colleagues in the House on Sunday, explaining their plans for this act and the rest of the week.

A potential government shutdown is looming after the Senate voted against a bill on Monday that attempted to extend government funding and suspend the debt ceiling for a year. Senator Pat Toomey (R-Penn.) said the Democrats were attempting to use this bill to usher in a new wave of unprecedented spending.

"They are in the midst of an absolutely unprecedented, very damaging spending spree on a scale that we have never seen, and they want us to come along and authorize the borrowing to help pay for it when we are totally opposed to what they're doing," Toomey told CNN.

The House will debate this week and vote on the Bipartisan Infrastructure Bill on Thursday, Sept. 30, the last day of the fiscal year and the last day before a shutdown would begin.