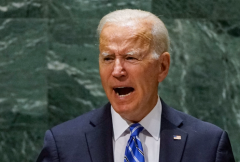 (CNS News) -- President Joe Biden’s vaccine mandate for federal employees does not apply to members of Congress or their staff. The executive order issued on Sept. 9 requires all 15 government departments to implement vaccination strategies for the 4 million-plus executive branch employees in those departments.

In the order, Biden references the United States code that gives him the power to create such a mandate. Under this code, the mandate applies only to “executive agencies” -- not to members of Congress, their staff, or to the Judiciary and its staff.

“For the purposes of this order the term ‘agency’ means an Executive agency as defined in 5 U.S.C. 105,” reads Biden’s executive order.

Because the executive order does not apply to Congress, USA Today fact checked the claim that Biden intentionally exempted the legislative branch from his vaccine mandate. USA Today noted that it is not within the president’s power to mandate a vaccine to the other branches of the federal government, only to the executive branch.

Josh Blackman, professor at the South Texas College of Law in Houston, agreed that Biden does not explicitly have the power to mandate vaccines for the other two branches of government.

“The president has broad power over the executive branch,” Blackman told CNS News.  “It is less clear that he can regulate Congress and the courts unilaterally. I think Congress could enact a statute that covers executive and legislative employees, as well as the judiciary.”

In April 2021 at a press conference, Speaker of the House Nancy Pelosi (D-Calif.) argued that even Congress could not require its members to be vaccinated.

“We cannot require someone to be vaccinated. That’s just not what we can do,” Pelosi said. “It is a matter of privacy to know who is or who isn’t.”

Regardless of Pelosi’s beliefs, outside the executive branch Biden has proposed a mandate for private employers with more than 100 workers to either require vaccination or weekly testing. This regulation, being crafted by the Labor Department, would impact about 80 million people. The mandate would also obligate all healthcare employees to get vaccinated, according to the Associated Press.

The mandate would be issued and enforced by the Occupational Safety and Health Administration (OSHA). Violations would carry penalties of up to $14,000 per instance.

The vice president of U.S. litigation at Alliance Defending Freedom, David Cortman, told CNS News the proposed mandate on the private sector is an attempted power grab by the Biden administration.

“The president threatens our liberty whenever his administration unilaterally invents, and aggressively enforces new powers in violation of the law,” Cortman said. “The abuse of power by the executive branch -- like we are seeing with the Biden administration -- destabilizes our constitutional form of government.”

“Violating the law to force compliance from private workers is a breathtaking overreach that every American should stand firm against,” said Cortman.