Ted Cruz: 'If We See a Biden Administration, We Will See Them Abusing Their Power on a Daily Basis' 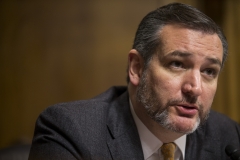 (CNS News) – When asked whether Joe Biden has the authority to mandate that public schools allow transgender students to play on the sports teams and use the locker rooms that they gender-identify with, Senator Ted Cruz (R-Texas) said, if Biden becomes president, he expects his administration to push “the agenda of the extreme and angry left” on a “daily basis.”

At the U.S. Capitol on Tuesday, CNS News asked the senator: “Joe Biden said that on his first day of office he will use Title 9 to mandate across the board that all schools that receive federal funding need to allow transgender students access to the sports rooms, locker rooms, and bathrooms of their choice. Do you think he has the power to unilaterally do this and do you agree with it?”

Cruz replied, “I have no doubt that, if we see a Biden administration, we will see them abusing their power on a daily basis and advancing the agenda of the extreme and angry left.”

“On his first day in office, Biden will reinstate the Obama-Biden guidance revoked by the Trump-Pence Administration, which will restore transgender students’ access to sports, bathrooms, and locker rooms in accordance with their gender identity,” the Biden-Harris LGBTQ+ policy reads.

Genetically, transgender “women” are still men, and they cannot change their genetic structure.  As the National Human Genome Research Institute at the NIH states, "Typically in mammals, the gender of an organism is determined by the sex chromosomes. In the case of humans, this happens to be the X and the Y chromosomes. So as you may recall, if you are XX, you are female. If you are XY, you are male."