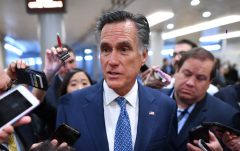 (CNS News) -- Sen. Mitt Romney (R-Utah) said he approves of President Joe Biden meeting with Saudi Crown Prince Mohammed bin Salman today, adding that it is necessary to foreign nations and express American ideas “whether they're friends or not friends.”

At the U.S. Capitol, CNS News asked Senator Romney, “Do you think it's appropriate for President Biden to travel to Saudi Arabia to meet with Crown Prince Mohammed Bin Salman?”

Romney said, “I think it's appropriate to travel to countries throughout the world, whether they're friends or not friends, and to express our point of view and to tell them what we think would enable them to be fully in our good graces.”

Biden is expected to meet with Saudi Arabia’s Crown Prince Mohammed bin Salman today, July 15, in a trip many suspect is crafted to secure oil because domestic gasoline prices are very high.

According to U.S. intelligence reports and other investigations, Mohammed bin Salman (MBS) approved a plan to kill Washington Post columnist Jamal Khashoggi. The writer was murdered and dismembered in the Saudi consulate in Istanbul in 2018.

When campaigning for office in 2020, Biden said, “I guarantee you, we’re going to end fossil fuels.” Once in office, Biden took action to reduce domestic oil production, including revoking the permit for the Keystone XL Pipeline, which was expected to carry 830,000 barrels per day of Alberta oil sands crude to Nebraska, according to CNBC.

In March 2022, it was reported that the crown princes of Saudi Arabia and the United Arab Emirates refused to take calls from Biden – calls that likely had to do with securing allies against Russia and ensuring continued access to oil. The crown princes denied these calls due to “unhappiness about Biden’s policies in the region,” reported the Times of Israel.

In a July 10 commentary, Biden wrote, “When I meet with Saudi leaders on Friday, my aim will be to strengthen a strategic partnership going forward that’s based on mutual interests and responsibilities, while also holding true to fundamental American values.”