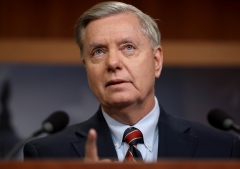 (CNS News) -- Sen. Lindsey Graham (R-S.C.) said he supported House Speaker Nancy Pelosi’s (D-Calif.) trip to Taiwan and stressed that the trip was “necessary” to “reinforce a relationship between us and Taiwan” and tell China “we’re not going to be bullied.”

At the U.S. Capitol on Aug. 2, CNS News asked Sen. Graham, “Should Speaker Pelosi have gone to Taiwan?”

“Yeah, I think so,” said Graham.  “I really appreciate what she did. I’m glad she went. If she’d backed off, it’d have been a disaster. Her visit was necessary, it reinforces a relationship between us and Taiwan.”

“It tells China we’re not there to change policy but we’re not going to be bullied,” said Graham.  “I think it sends a signal to our allies throughout the world that this is necessary.”

House Speaker Nancy Pelosi (D-Calif.) along with five other House Democrats visited Taiwan on Monday, Aug. 2. Pelosi is the most prominent politician to visit the country since Newt Gingrich’s (R-Ga.) trip while he was speaker of the House in 1997.

On Aug 4. China began its promised retaliation campaign by deploying planes and firing missiles near Taiwan.

Pelosi was reportedly welcomed to the country with electronic billboards with heart emojis. The speaker was also bestowed with a government honor called the Order of the Propitious Clouds with Special Grand Cordon. After meeting with Taiwan officials, including President Tsai Ing-wen, Pelosi left Taiwan on Wednesday, August 3rd.

Biden officials failed to say decisively if they supported Pelosi’s trip, with Biden saying last month, “The military thinks it’s not a good idea right now.” National Security Advisor Jake Sullivan said the trip and China’s retaliation have not deterred the White House from defending its interests in the Western Pacific.