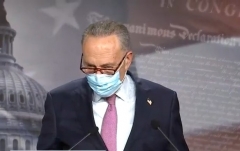 At the U.S. Capitol on Tuesday, CNSNews.com asked Senator Schumer: “Joe Biden said that on his first day of office he will give transgenders students access to sports, bathrooms and locker rooms in accordance with their gender identity in all federally funded schools. Do you think he has the ability to this and do you agree with his decision?”

Schumer said, “I agree with the decision and I know he’ll check things out thoroughly legally."

On the Biden-Harris Campaign website, a listed priority is: “Guaranteeing transgender students have access to facilities based on their gender identity.”