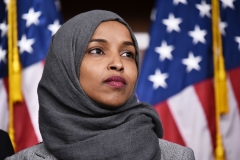 Capehart asked Omar how she felt about the president “directly attacking” her at some of his campaign events.

She replied, “For the last two months of this election cycle, waking up every single morning to text messages from my siblings asking if I was safe, because [Trump] chose to speak about me at every single rally, didn't really matter where he was, sometimes multiple times in a day as he had held his Klan rallies throughout the country.”

The interview was described by Washington Post as being a “one-on-one discussion about the election, her legislative goals and more,” and touted that the congresswoman “overwhelmingly won reelection this cycle despite attacks from her opponent and President Trump.”

Omar’s reference to the “Klan” was rebuked by many people on Twitter who know the history of the Ku Klux Klan and its origins in the Democratic Party.

Columbia University Professor of History Eric Foner describes the Klan: “In effect, the Klan was a military force serving the interests of the Democratic Party, the planter class, and all those who desired restoration of white supremacy.”

President Trump mentioned Omar in his speech in Pennsylvania in September, mocking the congresswoman for her support of the Green New Deal.

Vanderbilt University Political Science and Law Prof. Carol Swain has explained, “Since its founding in 1829, the Democratic Party has fought against every major civil rights initiative, and has a long history of discrimination. The Democratic Party defended slavery, started the Civil War, opposed Reconstruction, founded the Ku Klux Klan, imposed segregation, perpetrated lynchings, and fought against the civil rights acts of the 1950s and 1960s.”