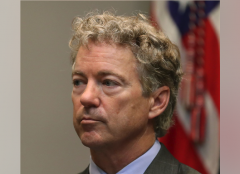 (CNS News) -- In response to a question from CNSNews.com, Senator Rand Paul (R-Ky.) said he believed Joe Biden's plan to force public schools to let transgender "women" (biological males) play on girls' sports teams and use their bathrooms and locker rooms was “one of the dumbest ideas to ever inhabit the brain of a politician” and that “it will eventually backfire.”

At the U.S. Capitol on Thursday, CNS News asked Senator Paul, “Joe Biden said that on his first day of office he will use Title IX to allow transgender students into sports teams, locker rooms and bathrooms in accordance with their gender identity [in all federally funded schools]. Do you think he has the power to unilaterally do this and do you agree with it?”

Paul said, “I think allowing boys to run in the girl’s track meet is one of the dumbest ideas ever to inhabit the brain of a politician. And to let boys take spots from girls in athletics is something so stupid that I think it will eventually backfire on them because there are many advocates, people who have girls that are in athletics, that think it’s a really dumb idea to let boys run in girls’ track meets. A really bad idea.”

On the Biden-Harris Campaign website, a listed priority is: “Guaranteeing transgender students have access to facilities based on their gender identity.”

This policy would allow biological males who identify as females to be granted access to female locker rooms, bathrooms, and sports teams without undergoing confirmation surgery or using hormone replacements.