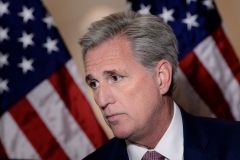 (CNS News) -- When asked if he believes President Donald Trump should receive the Nobel Peace Prize for his work on normalizing relations between previously adversarial nations, House Minority Leader Kevin McCarthy (R-Calif.) said yes, the president deserved the peace prize. McCarthy added that it was Trump’s new approach to the conflicts that brought the peace deals to a closure.

At the U.S. Capitol on Thursday, CNS News asked Rep. McCarthy, “President Trump has been nominated for two Noble Peace Prizes -- one for Israel-UAE, one for Serbia-Kosovo, do you think he is deserving of these awards?”

"Yeah, I do,” McCarthy answered. “You know, when I was on the lawn watching that [peace deal signing], it was a very moving moment. Not one country, but two recognizing Israel. Think for one moment of how much the world has spent on trying to find peace in the Middle East. It's not a Republican or Democrat issue, it's an issue for all of the world to keep it safe.”

“I think it was only because President Trump took new eyes and new thought to it, that he didn't try the same old way, in the same old place,” McCarthy said.

“I would've thought just as the White House did,” McCarthy continued, “open an invitation to so many people who care about the Middle East on both sides of the aisle in the House. But you know what Speaker Pelosi did? She called votes at the moment of time that we could watch three countries who did not recognize each other before, sign a document because of the power of this administration to make the world a little safer, and she called it what, a 'distraction’?”

“What did Adam Schiff call it when we closed down the consulate in Houston?” said McCarthy.  “People think it was the hub of spying. A ‘diversion,’ right? Or what did Adam Schiff say on the floor when we wanted to stop the hackers from getting our vaccine? He said, ‘it's not China’s responsibility to tell us about the virus.’”

“They are so out of step,” said the Minority Leader.  “Can they not move politics out and put what’s good for the American public first? I guess the answer to that question I see today. Are we going home? Are we staying here to do COVID relief? Is Nancy Pelosi only concerned about COVID relief when she's on TV? Where she says ‘we will not leave,’ and then sends us all home. Or she's gonna do 'everything in her power,' then wastes our time on that floor debating a non-binding resolution? I guess the answer’s very clear. Yeah, that’s what they’re going to do.”

Trump was nominated twice for the Nobel Peace Prize. Christian Tybring-Gjedde, who heads Norway’s NATO delegation, issued the first nomination for the president after he brokered the Israel and United Arab Emirates normalization deal. The UAE is the third Arab country, behind Egypt and Jordan, to recognize the state of Israel.

Trump’s second nomination for the Nobel came last Friday. Magnus Jacobsson, a member of the Swedish Parliament, filed the nomination after Trump oversaw an economic normalization agreement between Kosovo and Serbia.