Sen. Johnson: Biden Has No Authority to Forgive Student Loans and ‘No Respect for Constitutional Law’ 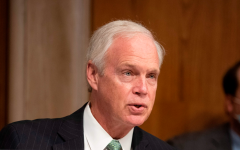 (CNSNews.com) – When asked whether President Joe Biden has the authority to forgive federal student loans, Sen. Ron Johnson (R-Wisc.) said, “no, he doesn’t,” and added that his administration has “no respect for the constitutional law.”

At the Capitol on Nov. 15, CNS News asked Sen. Johnson, “Does President Biden have the unilateral authority to forgive federal student loans? And, if so, where does that authority come from?”

Johnson replied: “No, he doesn’t."

CNSNews.com asked: "And where does  it come from?"

Johnson: "He doesn't have it. It comes from nowhere."

CNSNews.com: "And why do you think that is?"

"And, by the way, now the circuit court's ruled the same thing. So, he’s a lawless--It’s a lawless administration,” said Johnson. “These guys have no respect for the constitutional law. That’s why they need to be defeated.”

As CNS News has reported, the federal district court for the Northern District of Texas issued an order Nov. 10 “vacating President Joe Biden’s executive action that would have forgiven an estimated $400 billion in student loan debt and declared that Biden’s plan was ‘one of the largest exercises of legislative power without congressional authority in the history of the United States.’”

“Two individuals who had student loans but did not qualify for the Biden administration’s loan forgiveness brought suit against the administration’s action. The court ruled in their favor.”

“The court noted in its opinion that ruled against the Biden administration loan forgiveness plan that Congress had considered more than one legislative proposal for loan forgiveness – and had rejected them,” reported CNS News.