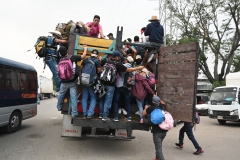 (CNS News) – Hours after being sworn in as the 46th president of the United States, Democrat Joe Biden signed 17 executive orders reversing core components of the Trump agenda. On immigration in particular, Biden’s order is a sweeping change that reflects a return to Obama-era policy.

“The policy of my Administration is to protect national and border security, address the humanitarian challenges at the southern border, and ensure public health and safety,” states President Biden in the order.  “We must also adhere to due process of law as we safeguard the dignity and well-being of all families and communities.  My Administration will reset the policies and practices for enforcing civil immigration laws to align enforcement with these values and priorities.”

While the Trump administration attempted to revoke DACA in 2017, Biden announced that he wants a path to citizenship for the 700,000 individuals currently enrolled in the program. “Comprehensive immigration reform with a path to citizenship is one of the most important things a Democratic Congress can do,” Senate Leader Chuck Schumer (D) echoed.

One of the Trump administration’s first (and most controversial) actions, the “travel ban” is dissolved under Biden’s order. First enacted in early 2017, and then revised and upheld in 2018, it banned entry of foreign nationals into the United States from eight countries: Iran, Libya, Somalia, Syria, Yemen, Chad, North Korea, and Venezuela.

The border wall between the United States and Mexico, a top issue of the Trump administration, will no longer receive funding for construction. Biden’s executive order ends Trump’s declaration of national emergency permitting the Defense Department to build the wall.

It provides a path to citizenship for the “non-citizens,” according to Sen. Bob Menendez (D-N.J.), who is working on the bill.

The measure would accelerate the process of granting citizenship by several years. In addition, the president plans to include illegal immigrants in the 2020 Census data, reversing the decision of the previous administration.

President Biden explained that these actions are only the beginning of a more comprehensive policy strategy. "There's a long way to go. These are just executive actions,” Biden said to reporters on Wednesday.

His goals are to “restore dignity to our immigration and our border,” according to the “Overview of First Ten Days” memo released by Chief of Staff Ron Klain (D) on the 16th.

Tech executives, including Apple CEO Tim Cook and Facebook CEO Mark Zuckerberg, spoke out in favor of Biden’s orders. Twitter released a statement saying, “The POTUS DACA Executive Order signed this evening delivers hope for ‪Dreamers. Diversity makes the U.S., our company, and our world better — we’ll continue to advocate for policies that support and recognize the important contributions of immigrants.”

Major Republican lawmakers opposed Biden’s moves, particularly his plans for amnesty. “There are many issues I think we can work cooperatively with President-elect Biden, but a blanket amnesty for people who are here unlawfully isn’t going to be one of them,” said Sen. Marco Rubio (R), according to the Associated Press.