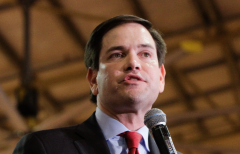 (CNS News) -- In reference to the For the People Act, which would prohibit states’ voter ID laws and which was filibustered in the Senate on Tuesday, Sen. Marco Rubio (R-Fla.) said, “of course,” voter ID should be required, and added that people produce ID all the time.

At the U.S. Capitol on Wednesday, CNS News asked Senator Rubio, “Do you think we should require an ID to buy alcohol?”

CNS News then asked, “What about to vote?” and Rubio replied, “Of course.”

When asked about many Democrat senators who support ID for alcohol but not for voting, Rubio said,“It makes no sense. People produce ID all the time, everywhere.”

On Tuesday, Senate Republicans filibustered the “For the People Act,” preventing it from moving to debate in the Senate. The vote was 50-50 along partisan lines. Sixty votes were needed to advance the legislation.

“Now, Republican senators may have prevented us from having a debate on voting rights today,” said Senate Majority Leader Chuck Schumer (D-N.Y.). “But I want to be very clear about one thing: the fight to protect voting rights is not over. By no means. In the fight for voting rights, this vote was the starting gun, not the finish line.”

Senate Minority Leader Mitch McConnell (R-Ky.) said, "Look, what this is really about is an effort for the federal government to take over the way we conduct elections in this country…. It is a solution in search of a problem."

Julia Johnson: “Do you think we should require an ID to buy alcohol?”

Johnson: “What about to vote?”

Rubio: “It makes no sense. People produce ID all the time, everywhere.”